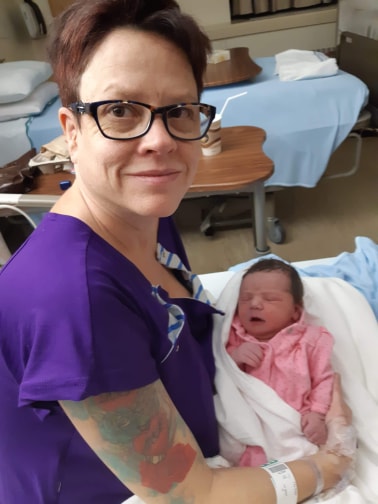 Why do women decide to become surrogates? And how does the process unfold? Canadian Fertility Consulting continues this series of interviews with our surrogates to share stories from women just like you. Women who decided to take a leap of faith, change someone’s life forever, and make their dreams come true. This is Alexis’ story:

1. Why did you become a surrogate?

I first found out about surrogacy in Canada through Facebook when I saw an ad for Canadian Fertility Consulting. The first thing I thought of was “Oh my gosh, I would love to do that for somebody” because I had gone through so much myself with my own fertility issues. I knew I would have the heart for it because I knew from my own experience what it’s like to want to have a child so badly as I struggled with fertility issues for seven years before I had my own kids. Just before we got married, I was told that my husband would never be able to father a child, but that didn’t matter to me. He’s always been my rock and I was going to marry him come hell or high water! We accepted the fact that we may never have kids and try to live life to the fullest. As time went on, we wanted to see where we stood, so I eventually went to is it an Ob-Gyn who sent us to Halifax to visit a fertility centre.

They checked my husband first, and he required a bit of surgery, but after that, he had an acceptable sperm count. Afterwards, they checked me out and discovered I had endometriosis and I also had numerous cysts on my ovaries that had to be removed, which led to multiple surgeries. I eventually went for IVF which was our last resort. I had our only three surviving embryos transferred, and I didn’t get pregnant, which was heartbreaking. We had this disappointment in December 2003 and in April 2004 I found out I was pregnant through natural means, and we were ecstatic! All in all, I’ve had quite the infertility journey myself, so I understand what it’s like for people who are currently struggling with this and I felt called to help.

2. Who supported you most in your decision to be a surrogate?

My husband and my children were always behind me 150%, and my other biggest support was my sister-in-law who was with me throughout the entire journey. But I also had other friends and family that were really supportive too. Surrogacy was brand new around here, and I’m the first woman in Cape Breton to do it, so it was a big deal to the whole community. I received a lot of questions such as “How are you going to give up this baby?” and I had to explain to others that this wasn’t my baby to keep.

3. How did you explain surrogacy to your children?

I took them aside and explained it to them. My son didn’t really have any questions, but my daughter was very excited. I told her that Mommy was going to have a baby for two guys in France, and no matter what the baby doesn’t belong to us but we’re hoping to have a good relationship with the Intended Fathers, and if everything goes well, we’ll have some new friends. They both took it very well, as they were old enough to understand.

4. How did your kids and family feel about your surrogacy?

It really didn’t feel much different than my own fertility journey, as I was used to taking medications and going in for appointments. The thing that was a challenge for me was simply finding the time to take all of the medication, as I worked twelve-hour shifts. I was also going through my journey during the winter and getting to all of my appointments was difficult because I had a lot of flight delays due to stormy weather. At the time, I didn’t let my work know what I was doing, and I had to miss work a few times. When they eventually found out, I was suspended for a day, but for me, it didn’t matter because this was important to me and I wanted to complete this journey not only for my Intended Fathers but for myself.

5. Why did you pick your Intended Parents?

The first time we met them it was over Skype, and we talked to them for over two hours! We just loved them, they were so adorable and excited, and we all just really hit it off. We still have plenty of contact with them.

During my surrogacy, I liked that there weren’t anxiously contacting me 24/7. They trusted me, as I had two pregnancies already and they trusted my judgement when it came to things like diet and exercise. As of now, we are still in touch. Although we don’t speak as often, we still get a Skype call from them once a month. They’re busy with full-time jobs and a new baby, so I’m happy with whatever contact we share. They’re in love with their little girl, she’s absolutely beautiful.

7. Did you have expectations about your relationship with them? Did reality turn out similarly?

The only thing I really cared about was to maintain a relationship with them after the birth. I didn’t want to just finish the journey and never hear from them again. While I was scared of that, that just simply wasn’t the case. I didn’t have huge expectations other than the opportunity to still be friends after the birth.

8. What was it like working with Parents from France in particular?

There were, of course, some challenges with the time zone and the language barrier. One of my guys spoke English very well, which helped a lot in translating for his partner. The time difference was challenging because when it would be five o’clock here, it was 10 o’clock there so they would just be getting ready for bed when I was getting home from work so talking during the week was a bit tricky. During the weekend it wasn’t so bad, because we all had a bit more flexibility with our schedule. Near the end, they wouldn’t want to let me go! They wanted to hear, and see, and be present for every moment they could. The night I went into labour I was actually talking to them and didn’t even realise because I didn’t have any labour symptoms.

My water broke on December 5th, and they were planning to arrive here on December 11th. I warned them from the beginning that I delivered early, as both of my kids came three to five weeks early. On the morning of the 5th, I woke up to go to the washroom and my water broke on the way there. I messaged them that they needed to get on the plane right away! They didn’t make it here until 26 hours later and arrived at the hospital at 3 am. They ended up missing the birth. I went to the hospital and they weren’t able to delay the birth until they arrived.

My surrogacy birth was a lot different than my own children. My water broke but nothing else progressed and they needed to give me Pitocin to induce labour. I was nervous about this, because I was used to giving birth naturally, and once the pain started with the first contractions, I just knew I wouldn’t be able to handle it. I tried to deal with it on my own, but the pain was so intense that I ended up getting three doses of fentanyl, which didn’t do anything. As the labour progressed, I was begging for the epidural, and I was disappointed in myself because I was so set against it and I wanted to have a natural birth. She also ended up getting stuck and was going into distress, so they had to use the vacuum suction to help get her out. It was an intense experience, but as soon as I saw her, it was so worth it. When the guys finally came to see us, I was a bit out of it, but my husband was great and was able to get some wonderful pictures of their first moments. The looks on their faces were absolutely priceless.

10. How did surrogacy change your life?

I can’t even fully explain; it’s done everything for me. I’ve always been a kind person, that’s never been an issue, but I feel like it’s given me this whole new sense of appreciation for life. I still feel wonderful from the whole experience, like I’m walking on clouds. Surrogacy has been such a powerful experience for me, especially since I’ve been through so much in my own life in relation to infertility and beyond. My life has changed a lot through this experience, and definitely for the better. Our marriage was also strengthened through going through this surrogacy journey together. We were strong before, but this really brought our connection to another level.

11. What was the best part of your surrogacy journey?

For me, it was when I was able to finally meet my guys in person. One of my Intended Fathers came up to me, gave me the biggest hug, and just started crying. I will cherish that moment for my entire life. I could tell how powerful this experience was for them as well, and they were just so grateful for everything. We received this gratitude not only from the guys but from their parents and sisters as well. It really showed me how many people’s lives were touched by this surrogacy experience.

12. What would you say to someone considering surrogacy?

Have an open mind and trust yourself. It can be difficult at times, and it’s important to keep in mind that it isn’t your baby. Reminding myself of that is what got me through. Although I was close to the baby, I didn’t allow myself to get too attached. After the birth, my Intended Fathers named me as her honorary aunt. I love her to death, and I’m happy to know that I brought a little niece into the world.

13. Would you consider being a surrogate again? Why?

I would be a surrogate again for my Intended Fathers for a sibling journey, but I don’t think I could do it for anybody else at this point. I have such a strong connection with them, and I’m worried that I wouldn’t be able to find the same kind of connection with a different couple. Overall, I loved every moment of my journey, and my husband feels the same way. I’m also not sure how my community would react to me doing it again. As I mentioned, surrogacy is not common here and I was the first woman in Cape Breton to do it! When I heard that, I couldn’t believe it. During the birth, the nurses were so excited, and the local newspaper wanted to take photos, but I wasn’t interested in that. I wasn’t doing this for the publicity, I was doing it for my guys and for myself. I also loved the community I found through Canadian Fertility Consulting, and I loved attending the retreats and meeting all of these other incredible women. While I’m getting older, and I’m not sure if my body can handle another pregnancy, surrogacy has truly changed my life for the better and I loved every moment of my journey.

Thank you, Alexis, for taking the time to share your amazing surrogacy story with Canadian Fertility Consulting.